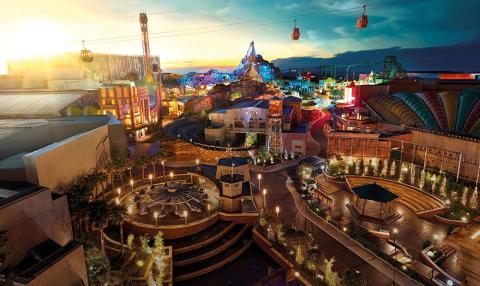 After more than two years of being gripped by COVID-19, Southeast Asia has some good news to be excited about with the opening of Genting SkyWorlds Theme Park in Pahang, Malaysia. The impressive, long-awaited RM3.3 billion project is part of the Resorts World Genting integrated resort.

Though Genting SkyWorlds is compact, covering 26 acres, a very efficient use of space allowed 26 rides and attractions to be featured in nine distinctly themed areas, plus numerous restaurants, food stands, and retail shops.

“We have rides placed strategically throughout the park to maximize the space, including some rides on top of each other,” says Greg Pearn, vice president, head – theme park operations, Resorts World Genting. “It really is a very clever and ambitious architectural masterpiece that has significant potential to be developed further.”

Studio Plaza is the park’s art deco-inspired grand entrance that pays homage to cinema, with famous movie characters displayed at the 360-degree “Legends Cinema” and on a 180-degree digital media wall designed to build excitement as guests make their way into the theme park. Creative dining and retail locations also invigorate this area.

Journeying on into the park from Studio Plaza, thrill-seeking guests may dare to venture into the California desert-themed Eagle Mountain, home to the park’s signature attraction, “Mad Ramp Peak – Full Throttle Racing.”

At this time, final work continues on the ride, and it will be ready soon. When it debuts, it should be a rousing experience for Genting SkyWorlds guests. “This is the prototype of Dynamic Attractions’ Synergy Coaster,” says Pearn. “Originally conceptualized around the ‘Sons of Anarchy’ franchise, the IP (intellectual property) was redeveloped many years ago, and now we’ve taken it to another level with a localized story we know will appeal to the large biker demographic here in Malaysia.”

Pearn tells Funworld it’s a sophisticated attraction, utilizing a mixture of technologies. Guests will ride motorcycles in groups of six. Using a com-bination of an onboard drive system and track-mounted linear synchronous motors (LSMs), they’ll experience an adventure through a California mountainscape, featuring tight ravines and impressive scenery, before the ride culminates in a side-by-side, high-speed finale, complete with a launch. Onboard audio and special effects round out this family‑thrill experience.

Genting SkyWorlds’ Central Park serves as its piazza—an inviting village square of sorts. Its main element is the Lake of Dreams, with picturesque fountain shows scheduled all day long. But Central Park also features some top-shelf attractions like “Night at the Museum: Midnight Mayhem,” which is a lively 3D interactive ride, and “Independence Day: Defiance,” a 4D adventure where riders help defend Earth from an invasion of aliens.

Genting SkyWorlds offers attractions provided by various suppliers, including Oceaneering, Dynamic Attractions, Zamperla, S&S – Sansei Technologies, Technical Park, ABC Rides, Zierer, Setpoint, and Chance Rides. Pearn says the attraction range is predominantly family-friendly, with some thrill rides included for good measure. There are three prototype attractions—two from Dynamic Attractions and one from S&S – Sansei Technologies—which he says are proving to be a real hit with guests.

The park has a phased opening plan and will launch attractions throughout 2022 and into 2024, when it hopes to debut a prototype SFX coaster. Pearn says there are also plans for a large indoor development space within the park, plus themed events, extended operating hours, and more con-tent that connects the park with the wider resort offerings.