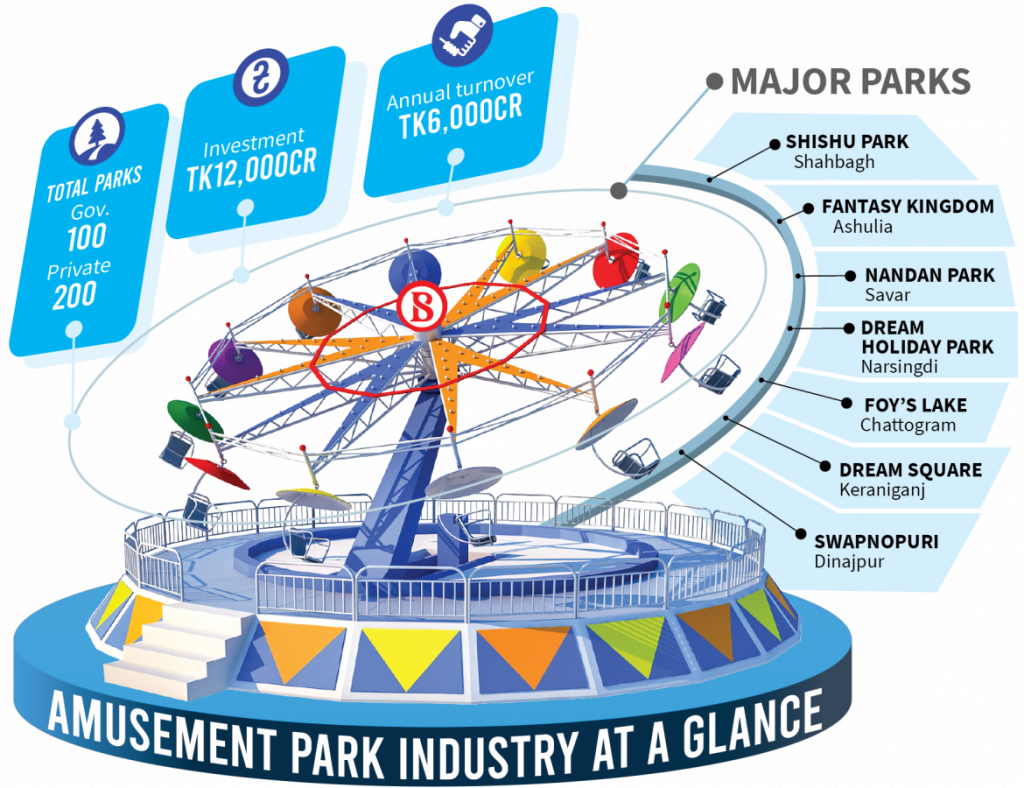 It was in the wake of a serious road accident in Dhaka in the beginning of 1990 that the idea of a new business came to GMM Rahman’s mind.

During months of recovery lying on a hospital bed in Japan, what attracted him was an amusement park he would see every day through a hospital window. He took a liking to that park without even going there, eventually leading him to set up a similar one for children in Bangladesh.

The group set up another park named Wonderland Amusement Park at Gulshan-2. Till now, the group has opened at least eight amusement parks in Dhaka, Chattogram, Khulna, Bogura, Faridpur and Munshiganj.

“I had to run from one government office to another to get permission for setting up the park in Shyamoli and importing equipment for games and rides,” said GMM Rahman.

In 2002, Concord Group made a giant leap forward by setting up the country’s biggest theme park named Fantasy Kingdom in Savar. It brought about a change in the concept of parks with its new park, featuring entertainment for people of all ages.

Many entrepreneurs followed in Rahman’s footsteps and set up private amusement parks. The amusement park industry has been getting bigger with each passing year – there are now around 300 parks across the country, of which, 200 are private ones.

The major parks include Nandan Park, Dream Holiday Park, Foy’s Lake, Dream Square, and Swapnopuri. Shahriar Kamal, president of Bangladesh Association of Amusement Parks and Attractions (BAAPA) told The Business Standard that the sector witnessed Tk12,000 crore in investments over the last two decades, with more than 5 lakh people involved in it. New investments are also in the pipeline.

Amusement parks cater for 8-10 crore visitors a year, he added. According to BAAPA, the amusement park industry’s annual turnover stands at more than Tk5000 crore.

Many parks constructed for personal refreshment now turn money makers. The Dream Holiday Park, one of the country’s largest amusement parks located in Narsingdi covering more than 60 acres of land, started commercial operation in 2012. The park provides entertainment and refreshments for children, youth, couples and the elderly.

But the story of the beginning of this park is different.

Prabir Kumar Saha, managing director of Phoenix Group, bought land at Panchdona in Narsingdi Sadar upazila for setting up a factory. But owing to a lack of utility connection, he could not set up a factory and dug canals and planted flower gardens on the land for family entertainment.

In his spare time, he used to spend time with his family there. Gradually, the garden house became a favourite of business friends. Added are rides suitable for people of different ages. The park, which started its journey with only five rides is now the largest amusement park in the country.

Prabir said, “I travelled to different parts of the world for the business purposes. I visited entertainment centres in many countries and decorated my park as per my own plan. I am beautifying the park and adding rides through local and foreign engineers. There are now more than 30 rides in the park.”

Like him, over 100 entrepreneurs, who set up amusement parks and refreshment centres in different parts of the country either for their own entertainment or for different purposes, have now turned money spinners.

According to the BAAPA, not only for personal entertainment, many entrepreneurs are now setting up parks for commercial purposes. Many are awaiting their business expansion.

“We started with 23 rides and our total number of rides is now 43. Besides, there are other amusement facilities,” said Anup Kumar Sarker, executive director of Concord Group.

“Till now, our total investment in amusement parks amounts to around Tk500 crore,” Anup, also chief coordinator of BAAPA, added. Tk10,000 crore Covid-caused losses, BAAPA President Shahirar Kamal said, “It is a booming sector and is getting bigger every year. The sector incurred Tk10,000 in losses owing to pandemic-led closures of parks.”

They have urged the government to provide stimulus support as well tax rebates for at least five years to this booming sector, he added. The industry has so far made a 50%-60% recovery as parks are running with 50% visitor capacity, he noted.